Healthbots can help both patients and HCPs

A chatbot named Gyant is helping both patients and HCPs diagnose and treat conditions. 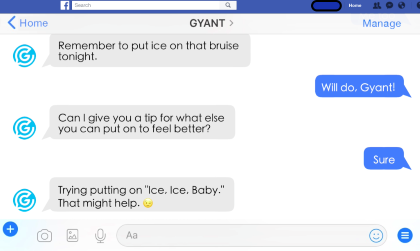 The dialogue is conversational. Over the course of three to four minutes, Gyant asks around 20 questions to get at the cause of the user’s discomfort and offer possible diagnoses or recommendations. Users can also ask Gyant questions via Amazon’s Alexa.

The chatbot is decidedly international:

A year after Gyant launched, it has reached 800,000 users, Behrens claimed. Since Gyant originated as a resource to screen patients for Zika, much of its traffic comes from Latin American countries such as Brazil, Mexico, and Colombia. The company is also generating traction in the southern parts of the U.S., Behrens added. Gyant is currently available in English, Spanish, Portuguese, and German, and there are plans to expand in French, Chinese, Arabic, and Hindi.

Other chatbots in the health space:

Other stories from MM&M:

More About the Author

This is the Klick Wire blog account. Here you will find archived versions of all your favorite Klick Wire stories. To get these stories delivered to your inbox every week, use the sign up form at the bottom of this page.

More from this author

EVERY HABIT NEEDS A HOOK

Thank you! You're now signed up to get the Klick Wire every week - news from the world of digital health marketing.

Sorry there seems to be a problem. Please try again later.