The largest social network surpassed 2 billion monthly active users (MAUs) in Q2. Two billion is a gigantic number but usage in North America is pretty saturated with growth of only two million from the previous quarter (10 million y-o-y). The daily active users (DAUs) also continue to climb to 1.325 billion as more people get used to sharing on the platform: 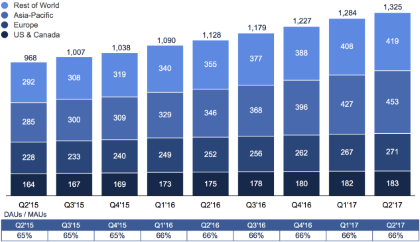 The DAU numbers for the different Facebook platforms are (in billions):

Revenue growth is slowing, mainly because there simply isn’t room to put more ads (without damaging user loyalty -Ed.) but the company also has Messenger, Instagram, and WhatsApp so there are still opportunities for some growth.

Investors liked this news and the stock surged. Check out the latest prices on Google Finance.

Poor Twitter. It actually lost users in the US in Q2 (but still had y-o-y growth) and revenue fell 14% y-o-y so unsurprisingly the stock was hammered.

This last quarter really makes the point that social connections in the walled garden are simply more valuable than more news-and-link focused posts on a public platform.

For health marketers each platform has its uses, and it is a Facebook First world for most health marketers but Twitter can still have some niche uses such as surrounding ASCO or other congresses.

More About the Author

This is the Klick Wire blog account. Here you will find archived versions of all your favorite Klick Wire stories. To get these stories delivered to your inbox every week, use the sign up form at the bottom of this page.

More from this author

Thank you! You're now signed up to get the Klick Wire every week - news from the world of digital health marketing.

Sorry there seems to be a problem. Please try again later.